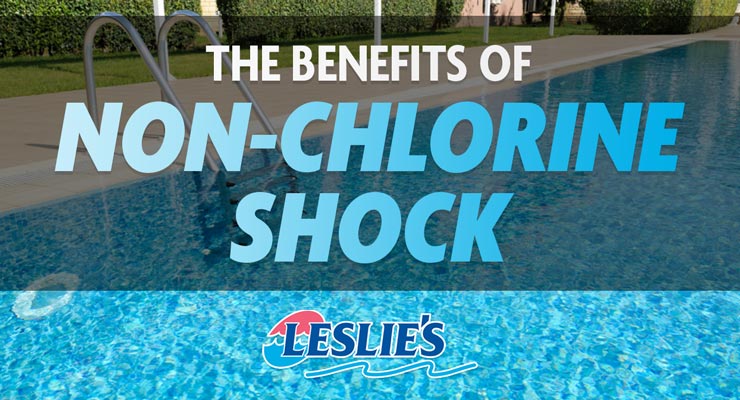 The Benefits of Non-Chlorine Shock

All kinds of different pool chemicals line the shelves these days, and it can be hard to sort out which ones you actually need.  If you’re just looking to make your pool water sparkle, non-chlorine shock might be the answer. Here’s everything you need to know about non-chlorine shock, and how it improves your water quality over traditional chlorine-based shock.

The chlorine you use in your pool every day performs the arduous task of killing disease-causing organisms and oxidizing contaminants like the sweat and oils that come naturally off your body.  Thankfully, it's very good at its job! Unfortunately, a potential side-effect of a low "Free Available Chlorine" (FAC) level is the creation of chloramines, also known as combined chlorine. Chloramines produce an unwelcome chlorine-ammonia odor, and also seriously irritate your skin, eyes, nose, and throat. That’s where shock comes in.

Most people shock - or "superchlorinate" - their pool water with a chlorine-based shock. Adding the proper amount of chlorine-based shock will destroy inorganic chloramines and remove additional contaminants from the water. You also need to superchlorinate if the pool has algae, or if there is a fecal accident. This process isn't perfect, however, and there are some downsides.

First, because the hot summer sun degrades it before reaching its full potential, chlorine-based shocks should only be used after dusk. Second, traditional shocks temporarily raise the level of chlorine in your pool to higher-than-normal levels, meaning that you can’t start swimming again until your FAC level is in the 2.0 to 4.0 ppm range (which can take several hours).

Given these challenges, you might be wondering if there’s a better way to shock your pool.  Thankfully, there is: say hello to non-chlorine shock.

Non-chlorine shock, such as Leslie’s Fresh ‘n Clear, is an oxidizer.  It uses the power of “active oxygen” to destroy contaminants in pool and spa water.  This eases the load of your regular FAC residual, allowing that chlorine to stay effective longer. This, in turn, prevents chloramines from building up.

What makes non-chlorine shock an incredible alternative to traditional shock is the fact that it does almost the same job without any of the negative side-effects.  Not only can you use non-chlorine shock while the sun is out, you can dive into the water just fifteen minutes of pouring it in your pool. Non-chlorine shock makes waiting around for hours after shocking your pool a thing of the past.

Routine shocking, typically weekly, is a necessity for any pool owner.  Chlorine by itself sometimes can’t keep your pool as clean and clear as it needs to be.  While traditional shock has always had some downsides, non-chlorine shock solves almost every problem.  You can shock your pool with non-chlorine shock at any time of day, and since it doesn’t superchlorinate your pool, you can get back to swimming in minutes instead of hours! (Note: always follow label directions for use, storage, and handling for pool chemicals.)

PRO TIP: If you still prefer the convenience and benefits of chlorine products but want to make sure you're getting the most out of it, be sure to check out our post on How To Maximize Chlorine Efficiency in Your Pool.

If you’re still not sure what kind of shock is best for your pool, stop into your local Leslie’s and talk to the experts.  Leslie’s also provides free AccuBlue® 10-point water tests to keep your pool water balanced and safe, so you can spend more time enjoying your pool!

JUMP IN WITH US ON SOCIAL!